The manufacture of straw hoods is labor intensive and time consuming. Straw weaving and plaiting, which is the basis of all straw hood manufacture, is little practised in Europe and the majority of straw is now woven in China. The Philippines also manufactures straw hoods, as well as supplying China with manila hemp, which is the base materiel for most straw hood weaving, Ecuador is also well known for production and weaving of Panama straw.

There are four main forms in which straw is woven: 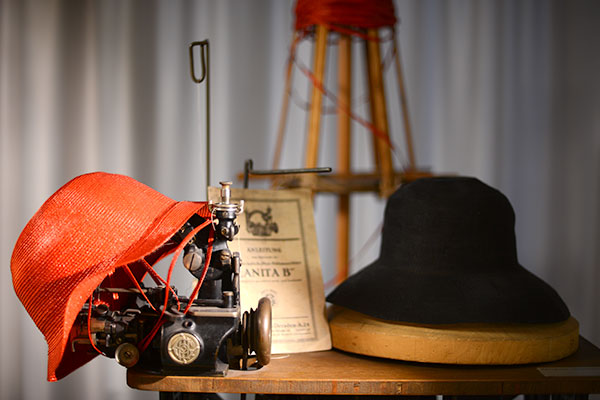 CAPELINE
This has a crown and brim and is normally used in the production of large brimmed hats.

CONE
This, as the name suggest is conical. It is used to make hats with a small brim or no brim at all.

BRAID
Sometimes called strip straw or Swiss braid, this type of straw is plaited into a continuous length of braid and then sewn with a slight overlap starting from the center and working out towards the required diameter, any shape can be sewn into the hood prior to final shaping. The more expensive braid is made with a finer straw and smaller weave, it also requires a longer length of braid to make a hat of similar size to a hat made with a coarse straw

PIECE STRAW
Normally sinamay, abacca or buntal, fine woven in sheet form.
One fact that is often overlooked is that almost without exception straw is plaited or woven by hand. To put things into perspective, a good quality sisal straw hood will take a straw weaver anything up to twenty-five hours of work. (A superfine Panama can take more than sixty hours!) This time does not include an additional four hours preparation of the straw, which include the selection and separation of the fibres, and starching the fibres together to form a workable strand up to four feet in length. Many thousands of these strands will be woven into each sisal hood, the correct amount is then selected and the weaving starts from the center (button) and continues to the outside edge at the required diameter. After the straw hood has been woven all of the excess ends are trimmed away, then bleaching takes place. The next process is to wash and scrape the straw, this is to ensure that it is clean and supple. The straw is then thoroughly dried, then it is quality checked and any minor repairs are carried out if required. The hood is then hydraulically pressed into a basic shape and finally the straw is graded. This example is for a fine quality sisal straw, although all woven straw hats are made this way, the coarser the weave or the thicker the straw used, the quicker and cheaper the hood is to make. Virtually all straw plait braid or woven straw hoods are manufactured by home workers with the straw hood factories carrying out the finishing procedures.
There are many straws for the modern hat manufacturer to choose from, both the Chinese and the Filipino straw weavers produce many different types of straw, woven in a myriad of ways. It is interesting to note that although many types of straw exist, the contemporary hat manufacture often uses only a few of the classic straws.

PARASISAL
A fine, high quality natural straw made from sisal, bleached or dyed to colour, comes in grades from one through to five. Normally reserved for expensive hats. Delicate in texture but resilient in wear, takes dye well. Parasisal is made using a two over two weave.

SISAL
The same as above but using a one over one weave, less popular than parasisal and just a little coarser.

VISCA
Visca originates from Japan, it is one of the few man made straw materials to be used for the weaving of hoods. It is often used for mass production hats as it is easily dyed and blocked, similar in appearance to parasisal but it is coarser. This straw softens easily and does not like to be mistreated, normally considered as a ‘one season’ hat.

PANAMA
Very cool to wear, resilient to crushing and often used for men’s hats, Panama straw comes from Ecuador, however in recent years Chinese bleached palm fibre is increasingly used to emulate the original. Normally a bleached finish, however it can be dyed.

RUSH
A stiff thick straw with a green colouring, normally left in its natural form, again cool to look at and wear. Smells of cut grass.

DOUBLE WHEAT
This straw is thick and coarse and although it can be dyed to colour, is usually seen in its natural golden brown. It is often used to make cheaper hats, it is hard wearing and if stiffened, hard to the touch, it has the smell of corn. This straw is easy to shape and difficult to sew.

SINGLE WHEAT
Very similar to double wheat, made from the same basic straw but the strands are flatter, also used for cheaper hats and dyed to colour. Both single and double wheat straws are natural.

XIAN
This is a very popular straw and comes in a number of forms including, natural, skin of xian, twisted xian (or seagrass) and bleached. Often associated with beach or holiday hats this useful straw can also be stiffened and be used in the production of mid quality hats. In its natural condition it is soft and has an irregular light brown colour with a smell of paper, a natural straw.

JUTE
This hood is woven with a natural material similar to thick string. It is loosely woven and naturally soft, it has to be varnished heavily in order to keep its shape after blocking. When made into a hat it is light and cool to wear and allows air to pass easily through the weave. It can be dyed but colors are pastel in shade.

PAPER PANAMA
This straw is woven from Japanese Toyo paper. Normally seen in cream or white although sometimes dyed. Sold as a simple blocked shape this straw can be rolled and packed without damage, ideal for use as a sun or holiday hat.

RAFFIA
This straw from Madagascar is widely use for the production of budget hats. Heavy to look at it is a casual straw and much used for beach hats.

Get your subscription now and keep up-to-date with the latest news in the hat industry.

Are you looking for a specific article, but can't remember in which issue it was published? Try our Article Index!